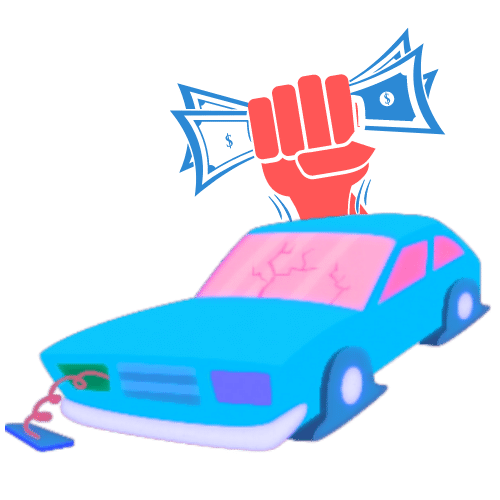 Sell Your Scrap Car In Brampton

Sell Your Scrap Car In Brampton Do you have got a scrap car that you want to sell? If yes, then you’ve come to the right place because our company Scraps Car Removal 4 Cash deals in buying scrap vehicles.

Scrap car removal 4 Cash serves the local city of Brampton so any news about it draws our attention. ON DECEMBER 19, 2019 very interesting news was published in Global news that a Man is arrested in the Hamilton area while stealing the catalytic converter from a car.

For many of us, it will be surprised why he was doing it. The answer is scrap metal recycling. Scrap metal buyers offer high prices for catalytic convertors which range from 50 to 500 $ depending upon the kind of catalytic convertor. We dig a little deep and found some more news about catalytic convertor stealing and it is surprising that this wave is all over Canada and even it is on the rise in Alberta.

How To Sell Your Scrap Car In Brampton?

If you want to get rid of your unwanted car, the easiest and most convenient way is to sell your scrap car to a junk car removal company in Brampton and ask them to pay the money for your vehicle. If you Google scrap car removal near me there are dozens of companies showing up on Google maps that offer you the top dollars for the Sell Your Scrap Car In Brampton  e.g;

Scrap Car Removal 4 Cash. They offer you the price according to your car’s make and model. Weight is a basic criterion to estimate the price but the most important factor is the CATALYTIC CONVERTOR.

The catalytic converter is a game changer in scrap car prices. When you sell your scrap cars with original catalytic convertors, they are offered high prices, and aftermarket, converters are offered lower prices at Scrap Car Removal 4 Cash, Brampton. Sometimes customers are promised higher dollars but once a tow truck driver comes and checks the car.

The exhaust is replaced or the convertor is off then the tow truck driver tries to explain but the customer thinks it’s a rip-off or being played with some techy way. This is not the case always. If the converter is not original then the car is worth less and that’s why companies in Brampton change the price when you sell your scrap car.

How Does A Catalytic Converter In Scrap Car Work?

A catalytic converter is designed to reduce harmful emissions; we know how gasoline is made up of hydrocarbons. If everything goes perfectly, all of the hydrogen and all of the carbons combine with all of the oxygen to give us carbon dioxide and water. No big whoops. But the combustion in an engine isn’t perfect. Some of the reactions are incomplete. Sell Your Scrap Car In Brampton.

And because of the heat in the engine, we create some molecules that don’t normally occur. So one thing we get is carbon monoxide. It’s bad. It gets rid of the ozone layer. And it’s also poisonous. The heat of the combustion means that some of the nitrogen, because it’s 78% of the air, gets jacked up and bonds with oxygen in any number of combinations.

And that’s also bad for your health, and it makes our rain acidic. Which is not only bad for our soil but also leeches down to the soil to the water table and can deteriorate our water table quality. Lastly, if some fuel isn’t burnt those harmful hydrocarbons get shot out of the tailpipe too.

Catalytic converters are designed to reduce all three of these emissions in Brampton. And the first one was patented by French chemical engineer, Eugene Hurdy in 1950. A catalyst is something that helps a reaction take place. The material inside the catalytic converter is called honeycomb,

it is a mixture of different precious metals which act as a catalyst to help convert your emissions to make them safer. That ceramic doesn’t react with anything, but it gets super-hot, and it stays super hot so the reactions can happen. Before selling your scrap car if you’re going for an emissions test, make sure your catalytic converter is hot. By the way, Brampton Govt has finished the emission test for the regular passenger cars but is still required for commercial vehicles.

Why Do People Steal Converters From Scrap Cars In Brampton??

Sell Your Scrap Car In Brampton Inside converters, there are rare metals, platinum, palladium, and rhodium that react with the emissions. They’re each worth about $30 a gram, and there are between three and seven grams of them in a catalytic converter. So that’s why people steal them in Brampton and other cities. And because of too much worth of these metals,

people sell their scrap cars to our company, Scrap Car Removal 4 Cash. But, the metal in a converter is worth about as much as a catalytic converter. The first is a reduction catalyst. Platinum and rhodium pull oxygen off the nitrogen atoms so the nitrogen gets shot out as benign N2, the way it came in the first place. The second stage is an oxidation catalyst. Platinum and palladium use the oxygen molecules in the exhaust, and they freed up oxygen from the first stage in two ways. First, it helps bind them to the carbon monoxide to get CO2,

the same stuff you breathe out. And second, this stage converter will oxidize any unburnt hydrocarbons as they pass through. Some cars have a pre-cat closer to the engine. It’s still a catalytic converter, but because it’s so close, it gets hotter quicker and it does a super duper job at converting, but because it gets hotter, it can wear out faster. The oxygen sensor before the cat lets your car know if there’s enough oxygen burning the fuel in the engine.

If too many hydrocarbons come through, a computer will adjust to mix accordingly. Another oxygen sensor after the cat lets your engine know if it’s pulling in enough oxygen to complete the reaction in the converter. It’s all super high-tech and it happens super fast. So do catalytic converters rob you of horsepower? 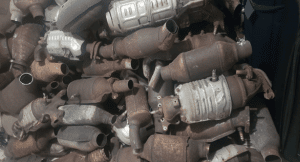 Before getting into that we have to understand the inner structure of a catalytic convertor while selling a scrap car. Inside the converter, you see the honeycomb which has clear channels. And you can see light through it. These chambers are designed to have the most surface area possible to make the reactions happen. They’re also designed to affect the exhaust flow as minimally as possible. Some brain trust cut these honeycombs out to open up the airflow, so that when they get inspected,

It looks like they still got one. But cutting these out means the air is suddenly sitting in a big hollow chamber, instead of shooting straight down a streamlined pipe. Cars are an intricate system of computers and tuning, and unless you’re skilled at this type of thing, just ripping out a part of your exhaust, can seriously damage you.

Studies show that American emission pollutants have dropped an average of over 70%. That’s a big deal in environmental statistics. When you look at pictures of any major city, before and after we started using them, it’s equally as easy to argue that the catalytic converter is one of the most important advancements in automotive history and the only main reason behind top cash after you sell your scrap car.

Scrap Car Removal 4 Cash believes in fair and honest professional service. When we quote the scrap car price, we consider that the car has the original catalytic converter and we try to be honest if is not. We never pressurize our sellers to sell their scrap cars cheap. You can confirm the convertor before making a commitment by sending the picture via text and we can confirm you before even quoting a price to avoid any confusion at the time of pick up.

Next time when you see or hear any news about catalytic converter stealing you should understand what the thief was up to.

How to scrap your car in Brampton?

Welcome to reality scrap your car in Brampton !! That car sitting in your garage, yes that’s the one parked and occupying the driveway. the

Car-Breaker Mississauga – We Wreck All Makes and Models

Are you searching for a Car-Breaker Mississauga? So, you have come to the correct place. Scrap Car Removals is one of the great car breaker

Sell used car for Cash in Brampton your car is no longer roadworthy, make use of a car recycling service like scrap car removal 4

Sell Your Scrap Car In Brampton

Do you have got a Sell Your Scrap Car In Brampton that you want to sell? If yes, then you’ve come to the right place

647 973 6574
PrevPrevious PostAre You Looking for A Cash for Scrap Cars Company in Brampton?
Next PostHow To Scrap car removal In BramptonNext